Sexual Desire Differences, What If There's Nothing Going Wrong? 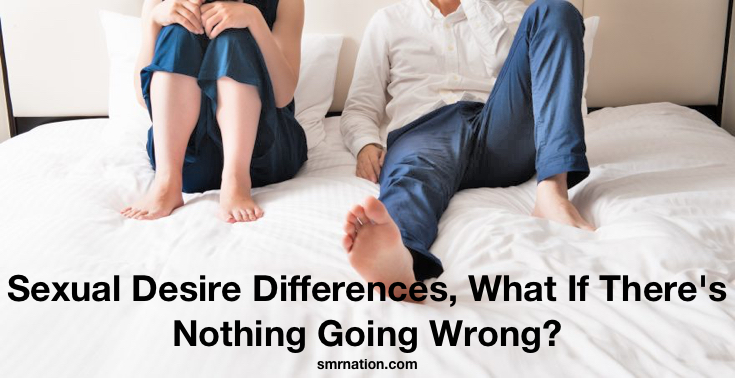 Are you the high desire or the low desire spouse when it comes to sex?
Have desire differences created problems in your marriage?
Sooner or later, most couples experience problems in this area. Desire problems are the most common sexual complaint for couples.
But what about (cue the dramatic music) if you’re the wife who has higher desire for sex than your husband?!?
It’s natural to feel bad about having sexual desire differences, especially if you believe that sex is a natural function. Most people believe that love automatically creates sexual desire in healthy people. And at first glance, this makes a lot of sense.
But if you buy into the belief that sexual desire comes “naturally,” you’re in for a load of problems. You’ll feel pressured to create something that just isn’t there. You’ll get defensive and despondent when problems surface in your sex life. You may even begin to feel defective or screwed up. In turn, it’s less likely that you’ll address these sexual desire problems and even less likely you’ll succeed if you do. Add to this the seemingly taboo-ness of a man with low sexual desire (not as uncommon as you’d think).
When you believe that sex is a natural function, it sucks to be the low desire spouse. You may see yourself as the one with the problem … plus it’s likely that your spouse (the high desire spouse) sees you that way too.
The other big problem with approaching sexual desire as a natural biological function is it actually helps create low sexual desire because it makes sexual desire impersonal. It’s hard to desire sex when it feels like your spouse just wants to relieve their physical or emotional needs.
Know this: There’s always a low desire spouse and there’s always a high desire spouse – and there’s one of each in every marriage.
There’s a low desire spouse and a high desire spouse on virtually every issue and decision in marriage. One of you wants to do something the other doesn’t, or wants to less than you. And even if you both want the same thing, one of you will want it more than the other. Plus, no one is the low desire, or high desire on everything. Positions shift on different issues throughout the marriage.
Desire differences are going to happen. And the positions you take (low or high desire) are simply points on a continuum.
The most freeing point of this view, neither the high desire position or the low desire position is right or wrong. They’re simply differences.
Let’s say you want to have sex every day, you’d likely think that would make you the high desire spouse. But if you’re married to a person that wants sex two times per day, you’re the low desire spouse. Desire isn’t either high or low due to biological drive, past history, or even how much you like sex – it results from some standard of comparison, usually this is your spouse.
If you buy into this idea it will help you stop the arguments over how much sexual desire is normal or healthy.
Let me state it this way – I really like sex.
I also really like chocolate – but not every day.
When my wife and I have attempted to have sex every day for a certain number of days in a row, it becomes burdensome and impersonal. But does that mean the couples who have sex more often than us are better or healthier than us? Nope.
Same for those that are less frequent. This is that comparison devil rearing its head again.
Differences are going to happen in marriage.
Especially when it comes to sexual desire.
Why?
Because this is how relationships are designed to operate. There’s more going on than “happily ever after.”
When it comes to marriage, the relationship is driven by more than just feelings, and it helps to realize that feelings aren’t always accurate. Feelings are open to interpretations. And our feelings can lead us to believe that when your spouse isn’t interested in sex like you are there must be something wrong.
Well, things going wrong and things not going the way you want are two different things.
And, if you can see that there’s actually nothing going wrong, it’s more likely you can turn things around and make them more to your liking.
The beauty of seeing desire differences (regardless of gender) as points on a continuum is it reframes the “problem.” Couples have often sought ways around this problem. Or more aptly stated, high desire spouses have sought ways to increase their spouse’s desire.
But, inevitably, the low desire spouse will control sex.
Here’s how this works:

When you look at it this way it seems simple.
The key is – how you experience this, and handle this, will say a lot about you regardless whether you’re the high or the low desire spouse.
The fact that you experience desire differences doesn’t necessarily mean there is something going wrong – and shifting your perspective could change everything.
It could open the door to you both using your sexual desire differences more productively. Desire problems can be useful to people and relationships – they push you to become more solid within yourself.
Being in a committed relationship brings two life forces front and center. The drive for togetherness and the drive for separateness. The desire to connect and share experiences with another person and the refusal to submit to another person’s tyranny.
When it comes to sexual desire, the low desire spouse understands tyranny. He or she feels oppressed, pressured to want sex and have sex, thanks to the badgering by their spouse’s higher desire. BUT, the high desire spouse understands tyranny too. He or she will feel the pressure to have sex when and how it’s available since opportunities may be few and far between. They must settle for “getting lucky” rather than feeling wanted. And on top of all this, they usually must act grateful for mediocre sex.
Sex is a common gridlock issue. And gridlock in marriage is inevitable … but also resolvable.
When it comes to sex, sure, the low desire spouse can stop having it, but there’s usually a limit to how far you can play that card if you want to stay married – particularly happily married.
So what can you do?
You must realize that what we’re talking about here is not just sex. There’s a whole lot more going on.
Most of the time, sex is approached from an other-validation stance (also called a reflected sense of self).
Take intimacy for example. Other-validated intimacy involves one spouse disclosing feelings, perceptions, doubts, fears, and inner truths and the other spouse 1)accepting, validating, and empathizing, and/or 2) disclosing in kind.
Other-validation hinges on reciprocity.
In sex this plays out as I’ll do you then you do me.
What this actually does is boosts or shores up your reflected sense of self.
Here’s something you must get straight in your mind: Being intimate with your spouse doesn’t mean you get the response you want.
Marriage is an interdependent relationship – its resilience lies in both spouse’s ability to function independently.
The balance between your reflected sense of self and your solid flexible self has a dramatic effect on your level of sexual desire and passion – and whether or not you miss it when they’re non-existent.
You may be a good person with fine values and good intent, but if your anxieties drive you to avoid things or act impulsively, you’ll do things that violate your integrity, ideals and goals, and diminish your self-worth. You’ll react harshly to other family members when your anxiety is high, which may go against your ideal of being a good solid parent, which then makes you feel guilty, thus your self-worth takes another hit.
When it comes to sex, like I stated before, there’s more going on than just sex.
Look at it this way – I’m the high desire spouse in my marriage and I’ve learned there are many things I can do to get my wife to have sex with me. I can woo her, set up a romantic date, get her several drinks, manipulate, beg, persuade, plus many other things that may work. But, none of these tactics make her want me.
That’s something I can’t control.
When it comes to being wanted … all I can do is present something worth wanting.
And something worth wanting develops best when you confront yourself, challenge yourself to do what’s right, and earn your own self respect.
A scary proposition, yes. But it’s the way a marriage fully alive really works.