How does your view get in the way? 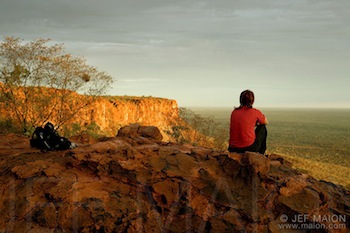 Entering Panera the other morning I ran into one of the baristas outside taking a quick smoke break.
I’ve created a friendship with her over the course of my time there each morning.
As I walked up to her she stated, “I feel guilty about smoking, but it is just so hard to quit.”
I replied that if she keeps telling herself it’s hard to quit, it will be.
Let me explain.
The mind always believes what the mind tells itself is true.
Therefore, if her mind tells her that quitting is hard, it will be hard. And since her mind — like everyone’s mind — strives for consistency of belief and action, telling herself that quitting is hard means she won’t quit.
I also told her that a “belief” is just an “oft repeated thought”.
If the mind thinks something often enough or long enough — whether it is factually true or not — it will come to believe it’s true.
We “believe” many things that aren’t actually true, but since we have always thought them, we believe them, and act accordingly.
I continued my little mini pep talk with the following fact:
Nothing ever changes until we decide to get up today and do something different from the way we did it yesterday.
Most of us have good intentions to “someday” change something about our lives. But most people never change because they never get around to doing something different today from the way they did it yesterday.
I concluded our mini coaching session with the encouragement to think of stopping smoking as a “challenge” – not something that is hard.
Our brain can tackle a challenge, but it won’t volunteer to do things it believes to be “hard.”
She could even start with this: get up tomorrow with the commitment to smoke three less cigarettes than she smoked today.
She smiled and said, “This is good stuff. I wish I could post it on Twitter.”
So, here are your Twitter Truths:

How about you?
How is the way you view things getting in your way?
What is your brain telling you that you should change, but you believe it will be too hard?
What is one thing you could do different today from the way you did it yesterday that could take your life in a new direction?
In other words, where are you stuck right now?
If it’s your marriage or important relationship, I can help.
This summer my online course, Blow Up My Marriage, gets underway again. I have been teaching this class over two years and it has helped hundreds of people create better lives and relationships.
I only have one question:
Today, what are you going to do different from the way you did it yesterday?
See you in class.